[panting] and not from sex

Four (or five) awful freaking weeks of ceaseless studying! It’s balls to the walls around here folks, 9 am to 8 pm on Fridays and Saturdays, and even Sundays. It’s graduate school and it is a ton of work. Can’t wait for this short session to be done because my daughter and I are going to party it up.

Expect short blog posts. Enjoy what you get and consider yourself lucky.
Posted by admin at 6:10 PM 1 comment:

Yesterday was my Father’s Day. I was treated to a breakfast at Anton’s restaurant (I had the “hungry student”), a flick at Springfield 8 (Fantastic Four), then I spent the rest of the day either reading comics with my daughter, or sitting my chair reading comics to myself. After the child went to bed my wife and I celebrated our wedding anniversary a day early. It was a dandy day, I tell you what.

On June 17, Father’s Day and our actual anniversary, we are celebrating with our families. My parents are coming to town, both grandmas will be here as will an aunt and a cousin. The best part of the whole deal is that I was able to get my homework (all of it) completed on Friday before all the festivities began. That makes for a nice holiday. 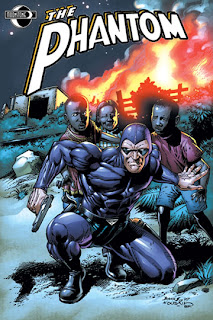 This is variant cover that you
should purchase if you want to
help out.

Proceeds from purchasing the variant cover B, by Darryl Banks & Terry Austin, will benefit the charitable organization, Invisible Children. Read a preview of the comic here.

Ripped from today's headlines, The Phantom takes on an African Warlord who believes he is a prophet of the Almighty God himself. At stake, are the lives of thousands of children stolen from their homes and indoctrinated into the Warlords Resistance Army through mental, physical and spiritual torture. The Warlord HIM has conscripted these 'Invisible Children' to fight his Holy War and assert his self-proclaimed 'Divine Will' on the peoples and Governments of Africa in his first step towards world domination.

Mike Bullock sent me the notice this morning. He didn't email me to drum up business or increase his own sales. He believes in this project enough that he was one of the first to give, donating his paycheck to Invisible Children. I have already contacted Stu, my comic book guy, so he can order me a copy of the three-part story. I was careful to specify that I wanted the variant cover so my money goes to charity.

A review of the book, and its appropriateness for the classroom, will be posted at THE GRAPHIC CLASSROOM as soon as I read all three books.

There is also a documentary out about this issue. IMDb carries the information. Currently, Netflix does not carry the movie, but I sent a title request. If you have Netflix you should do the same.

Email ThisBlogThis!Share to TwitterShare to FacebookShare to Pinterest
Labels: Comics

The next four weeks will consist of light blogging. Thank goodness I spent time writing my comic book reviews for my other blog over break. Both of my summer classes are short and intense, lasting only 4-5 weeks rather than the traditional 16 weeks. My college owns my behind for the next month. So don’t be surprised to see a lack of blogging.

Email ThisBlogThis!Share to TwitterShare to FacebookShare to Pinterest
Labels: College

The parties have ended. My daughter is 7-years-old tomorrow (Monday) and we have partied ourselves silly over the last two weeks. We have a big family and lots of friends so we split the parties up.

At the slumber party last night, the girls decided to play in the tree house around 10:30 pm or so. My daughter was overheard telling her friends that her Daddy and Papa built that tree house for her. It’s nice to know that you are raising an appreciative person.

You can read all about the adventures and see the pictures here.

Email ThisBlogThis!Share to TwitterShare to FacebookShare to Pinterest
Labels: Family

Quagmire of the Incidental

I was glad to hear, laughed to myself when I heard, that Paris Hilton was going back to the clink to serve her out her entire 45 days. I thought it was funny that she was crying for her momma. Then I saw all the news coverage on the ordeal and it hit me.

I should not celebrate this. This entire ordeal is a mess and is a distraction to the real problems of our world. I am being sucked into the quagmire of the incidental. Even if justice is served, we should not celebrate the pain and suffering of others. This is what we care about? How many people were more interested in the Paris Hilton jail time than CNN’s presidential forum on faith last night?

No Women or Blacks

I was talking to some of my more conservative-leaning family members the other day. One cousin mentioned that she didn’t think Hillary or Barack were viable candidates because one is a woman and one is black. Now before you see those as sexist or racist remarks, let me clarify the statements.

She said that anyone who is well traveled will know that the rest of the world has different standards and beliefs than the United States. Other places (the Middle East) look poorly on both women and blacks. If I am representing her position correctly, she felt that many parts of the world would not take a female or an African American seriously and that both those candidates would be left out of negotiations and the like. Ultimately, having either of those candidates as President would damage the United States’ standing in global affairs.

It is a point that I had not considered. So I've given it some thought. A Red Herring says I. It is an argument that is designed to distract us and put fear in the electorate. If I am not mistaken, seems that there are a lot of folks around the world, including the Middle East, who already do not respect any Americans. I direct your attention to our current President, King George. He’s a white man and he’s making no real progress with other countries.

Let’s see if this is really true? Have there been any females or blacks in major positions of power regarding foreign affairs?

Email ThisBlogThis!Share to TwitterShare to FacebookShare to Pinterest
Labels: Politics

Students in Illinois Denied Diplomas Because of Cheering

Five students in Galesburg, Ill. were denied their high school diplomas because their families cheered too loudly during graduation. It had been a problem before so the school board required the graduating seniors and their parents to sign a good behavior contract. Not everyone kept their part of the bargain and so their kid's diploma is being held hostage. Want the whole story? Click here.

(Skinny Wife gets the happy-gram for the tip.)