GOOD INTENTIONS, A FLAG, AND A KICK TO THE BALLS 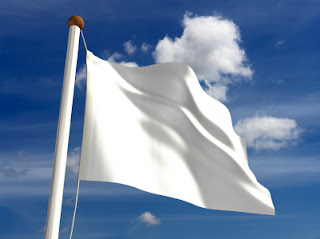 Sometimes asking for help gets you nothing but more heartache. I’ve been flying my white flag for a few weeks now. Somehow I got myself into a game where white towels thrown into the ring are just thrown back. I keep looking for a referee. I’ve tried like hell to just walk out of bounds, but it’s like I’m inside some kind of indoor soccer hell where there are no out of bounds lines. Just walls –– thick concrete walls covered in a shiny pearlescent white that smells of hospital and iodine. But there ain’t no healing going on, at least not round these parts.

My day of helping others –– rather than doing my own work, which is heaping up in a mound of muck and mire –– got me yelled at for doing what I was asked in the first place, followed up later with a nice kick to the balls.

My entire world is leaning on me right now. I understand and most of the time I just do what my mother says: “suck it up and move on”. But sometimes it can be a bit much. A bit. A smidge. A dump truck. Did I type that out loud?


I spent the entire day on someone else's work. When finished I headed to my place of employment to do the job I've been asked to do there. Something for me. Alas, the workday took too long and the doors were locked. Now I get to think about all that work I can't do all weekend. Yeah me.


I made my last stop today. I asked, ever so nicely, this one person who depends entirely upon me for nearly everything now, if she could, just possibly, maybe, ask this one other person for some assistance. Just this once. The response was curt and quick:

“Oh I can’t ask him for help. He works long, hard hours.”

It’s entirely possible I won’t answer the phone anymore. In fact, I very much mean not to. Every time I do it doesn’t bode well for my family or me. Email and texting is much easier to ignore or put on hold. Not responding is like saying no without all the arguments and guilt and insistence and guilt. If I can’t get help, then I may just have to not be around.

I don’t know who I think I’m kidding. I’m not good at crap like that. I can’t shake the guilt that someone really needs help and I’m ignoring them. I was raised to never turn your back on family and friends. When people need you, you must be there. But a fella can dream, can’t he?
Posted by admin at 5:23 PM