Tell Me a Story, James Dickey, of Your Farm Boys 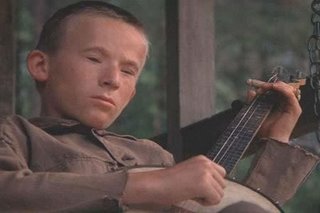 You probably think you've never heard of James Dickey, poet and writer, and Farm Boy yarn weaver. Most poets never gain any fame outside literature circles, and the same would probably be true of Dickey had his book Deliverance not been turned into an iconic Hollywood film by the same name. Ah, so you have heard of him? I thought so.

Well Dickey wrote a poem, which just happens to be one of my favorites, along the same vein as Deliverance. When he was young, Dickey was told a story. I imagine it was some older cousin or uncle as they tell the best scary stories. The yarn was wound around an old rural myth. Many folklore stories come from fear, and they serve as a warning to the young not to engage in such behavior. The first part of this poem is the story, the warning to stay away. The second half of the poem is the sheep child talking about its life.

Having grown up in a rural community, I am drawn to works about my culture. I share with you my favorite James Dickey’s poem.

Farm boys wild to couple
With anything with soft-wooded trees
With mounds of earth mounds
Of pine straw will keep themselves off
Animals by legends of their own:
In the hay-tunnel dark
And dung of barns, they will
Say I have heard tell

That in a museum in Atlanta
Way back in a corner somewhere
There's this thing that's only half
Sheep like a woolly baby
Pickled in alcohol because
Those things can't live his eyes
Are open but you can't stand to look
I heard from somebody who ...

But this is now almost all
Gone. The boys have taken
Their own true wives in the city,
The sheep are safe in the west hill
Pasture but we who were born there
Still are not sure. Are we,
Because we remember, remembered
In the terrible dust of museums?

Merely with his eyes, the sheep-child may
Be saying saying

I am here, in my father's house.
I who am half of your world, came deeply
To my mother in the long grass
Of the west pasture, where she stood like moonlight
Listening for foxes. It was something like love
From another world that seized her
From behind, and she gave, not Iifting her head
Out of dew, without ever looking, her best
Self to that great need. Turned loose, she dipped her face
Farther into the chill of the earth, and in a sound
Of sobbing of something stumbling
Away, began, as she must do,
To carry me. I woke, dying,
In the summer sun of the hillside, with my eyes
Far more than human. I saw for a blazing moment
The great grassy world from both sides,
Man and beast in the round of their need,
And the hill wind stirred in my wool,
My hoof and my hand clasped each other,
I ate my one meal
Of milk, and died
Staring. From dark grass I came straight

To my father's house, whose dust
Whirls up in the halls for no reason
When no one comes piling deep in a hellish mild
corner,
And, through my immortal waters,
I meet the sun's grains eye
To eye, and they fail at my closet of glass.
Dead, I am most surely living
In the minds of farm boys: I am he who drives
Them like wolves from the hound bitch and calf
And from the chaste ewe in the wind.
They go into woods into bean fields they go
Deep into their known right hands. Dreaming of me,
They groan they wait they suffer
Themselves, they marry, they raise their kind.


(NOTE: Dickey's poem has some words tabbed over. Blogger doesn't allow me to insert tabs, nor does it allow me to use gallons and gobs of spaces. Bastard Hell! Just be aware that the poem is not reprinted it its original state. The same is true for my poem in the post below.)

FJ: Nice post. A little FYI -- Billy Redden, the Banjo Boy from "Deliverance," didn't do his own fretting. This New Yorker piece noted:

John Boorman, the director of “Deliverance,” had presented him with the instrument he used in the scene, declaring, “You pick a mean banjo!” Redden had always treasured the remark, particularly because — after he proved unable to convincingly fake the left-hand fretwork — Boorman had had to deploy another boy to hide behind the swing and slip his hand through Redden’s sleeve to finger the changes.