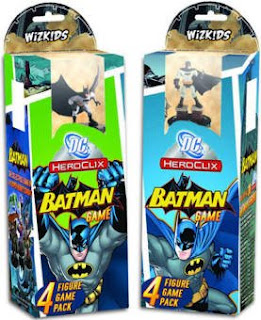 As you may guess, my future classroom will not be filled with pretty little posters of cute kittens hanging on a branch with the caption: “Hang in there, baby.” Oh no, my classroom will be decorated in heroes, both super and the non-super variety. One of my focuses is on helping students find passion and purpose in life, to understand the bigger community, and to find peace in doing for others. We are in search of our inner hero.

I happen to use comics as a significant catalyst to achieve my end goal. How about linking that bigger goal back to the curriculum, and to mathematics specifically? Enter HeroClix by WizKids. HeroClix is a superhero game played on a foldable map. It is strategy game very similar to Risk, but with more mental mathematics. The game pieces consist of 3-dimenstional superheroes on a round base. The base has a window with that superheroe’s statistics showing through. Whenever that superhero is attacked and is injured, then the dial on the base is moved or clicked, and a new stat appears. If the superhero takes enough damage, then he or she clicks a KO (knock out) and is taken off the board. 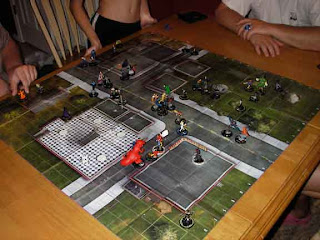 A map with characters.

Here’s the thing: Mental mathematics determines everything. Players must be able to cipher in their heads in order to determine if they should make an attack on another player, how large a dice roll is required, and how many clicks of damage a superhero takes. Some examples of mental math used are: Doubles plus or minus 1, Doubles plus or minus 2, Counting on, Adding 10, Adding 9, and Adding 8,

Unlike educational games that are designed for the classroom, and games where kids know they are being tricked into doing mathematics, HeroClix is an authentic game played by kids and adults at real tournaments across the nation. There is no trickery involved; it is the real deal.

The game rules can be very complicated, but they do not have to be. Each superhero has a set of powers that can also come into play. However, the game can be played sans powers, which makes play easier to learn and faster to play. As well, HeroClix has created the Alpha series, which has simpler rules and is geared for ages 8 and older.

Confused? I know what you mean. It’s really not that bad at all and it is a huge draw for kids, especially boys. Did you catch that? It’s worth your time.

Most comic book shops have HeroClix game days, where people come in and play. The sage players are very good to slow down and assign a mentor to teach you the essence of the game. My 8-year-old daughter and I bought some HeroClix and recently went to our first HeroClix tournament at my local comic shop. When I told the players that I was a teacher and I wanted to introduce HeroClix to my students, they teamed up and went through their stash. They culled out over 200 game pieces, 5 maps, and a pair of dice then donated it to my future classroom.


Why would they do this? You see, HeroClix is sold in boxes with several game pieces inside. You don’t know what game pieces you are getting. Consequently, you end up with multiple pieces of the same figure. That means that most players have extra pieces they do not need. These guys take this game seriously and have hundreds, if not thousands, of game pieces. So it is easy, and quite common, for them to donate extra pieces to newbies. These folks love their HeroClix game and want to share it with others. I am certain that they would even volunteer to come to your classroom and teach you and the kids to play.

Amazingly, it’s not as geek-filled a game as it sounds. I brought it home, sorted my figures and put out a map. My daughter begged my wife to play and she agreed, albeit reluctantly. At the end my wife said it was a lot of fun. During every turn I helped my daughter make decisions. She did the math and rolled the dice. 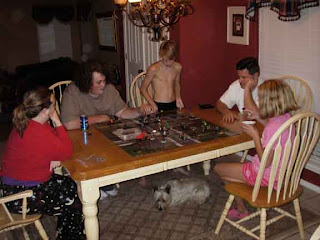 Small maps can be played in 15-30 minutes, perfect for that rainy day of indoor recess. A teacher could use two or three game pieces on the document camera to demonstrate the need for mental mathematics abilities and to teach the addition and subtraction strategies. You could even have small tournaments in class to give kids some mental math practice.

The game also promotes diversity as there are characters that are female, persons representing minorities, and those with disabilities. If you are looking for a way to bring superheroes into mathematics, then consider HeroClix.

During my trip to DefCon 7, I introduced the game to my sister’s family. We stayed up until after midnight playing and had a fantastic time. We even donated some pieces and a map to the family for putting up with comicness all weekend.
Posted by admin at 2:37 PM