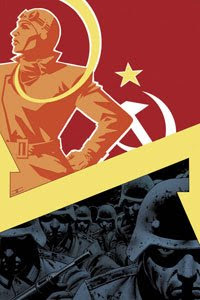 Ever heard of the Night Witches – the all-female bombers during World War II? I was skimming my recent issue of PREVIEWS, the comic/toy/gaming magazine when I came across this gem. Writer Gareth Ennis is penning a comic about these brave ladies titled GARETH ENNIS' BATTLEFIELDS: THE NIGHT WITCHES #1.

Late summer, 1942. As the German army smashed deep into Soviet Russia and the defenders of the Motherland retreat in disarray, a new bomber squadron arrives at a Russian forward airbase. Its crews will fly flimsy wooden biplanes on lethal night missions over German lines, risking fiery death as they fling themselves against the invader – but for these pilots, the consequences of capture will be even worse. For the pilots of the 599th Night Bomber Regiment are women. In the deadly skies of the Eastern front, they will become a legend known, to friend and foe alike, as the Night Witches.

Originally, I got into comics as a way to infuse my daughter with my geekness and love of sci-fi and fantasy. For me, the goal was to find strong female characters for us to read together. I love nothing more than to find girl-power oriented stories. Now I doubt this title is for an 8-year-old, but someday she will be of the right age and I will have a stockpile of strong females to throw at her. (I do have plenty of strong female comics that is appropriate for her age level.)

It is my impression that Ennis will do other "battlefield" story lines, which should prove very interesting. Dynamite puts out some great comics so it deserves a look.